Though a little belated, on our behalf, here is the second in a series of articles from BlackDragonHunt about Sagrada Reset. We hope that you’ll enjoy a deeper look into the themes behind the early episodes of this show.

BlackDragonHunt is a freelance programmer and J-E translator working with companies such as MangaGamer. You may know him for his work on The House in Fata Morgana, Go! Go! Nippon! 2015, and other things. You can find him on Twitter at @BlackDragonHunt or on his own blog at https://blog.bdh.moe/.

You can find the rest of the article after the jump. Thank you once again, BlackDragonHunt! 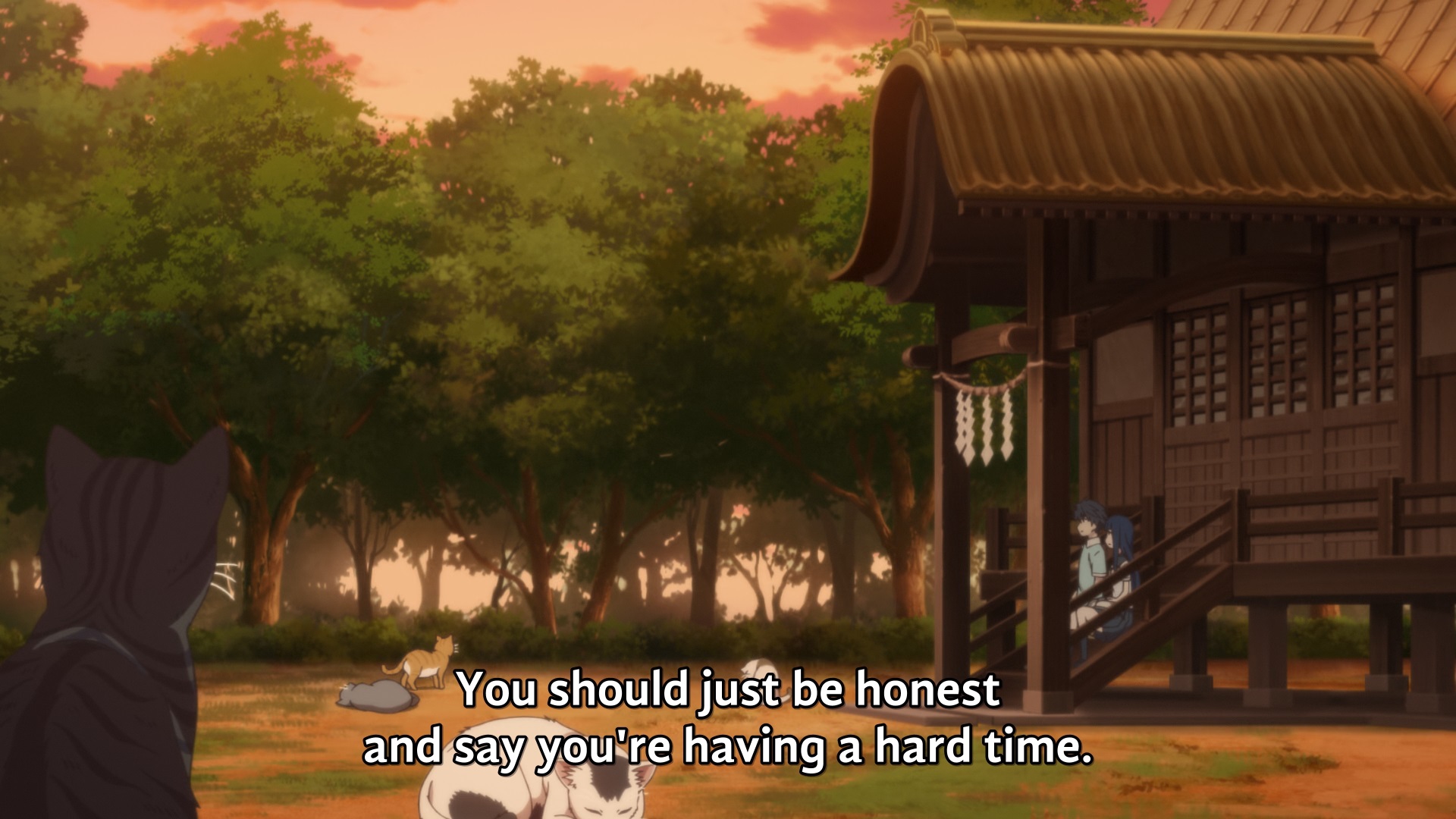 “I love messages,” opens Sagrada Reset’s first volume. On his way to deliver a message of his own, Asai Kei ponders these words, spoken by an old friend two years prior.

“And what if it’s something sad?” he asked.

“If it needs to be said, I’ll figure out the best way to say it, the best words to use, to ensure the message gets across as best as possible.” Be they happy or sad, trivial or deeply serious, Souma Sumire cherished the simple act of transmitting words—ideas, information, concepts, feelings—from person to person.

And what if you don’t understand what the message is trying to say at all? he wonders; a question he never ended up asking because she passed away before he had the chance.

Kei goes on to deliver the message, hoping the apparently meaningless words will bring someone joy, and setting the stage for a tale about how we communicate and the various ways that communication can break down.

The scene above was mostly omitted from the anime adaptation of CAT, GHOST, and REVOLUTION SUNDAY, which comprises Sagrada Reset’s third and fourth episodes, but the core idea behind it remains—particularly prominent in the various abilities that take center stage in the story. 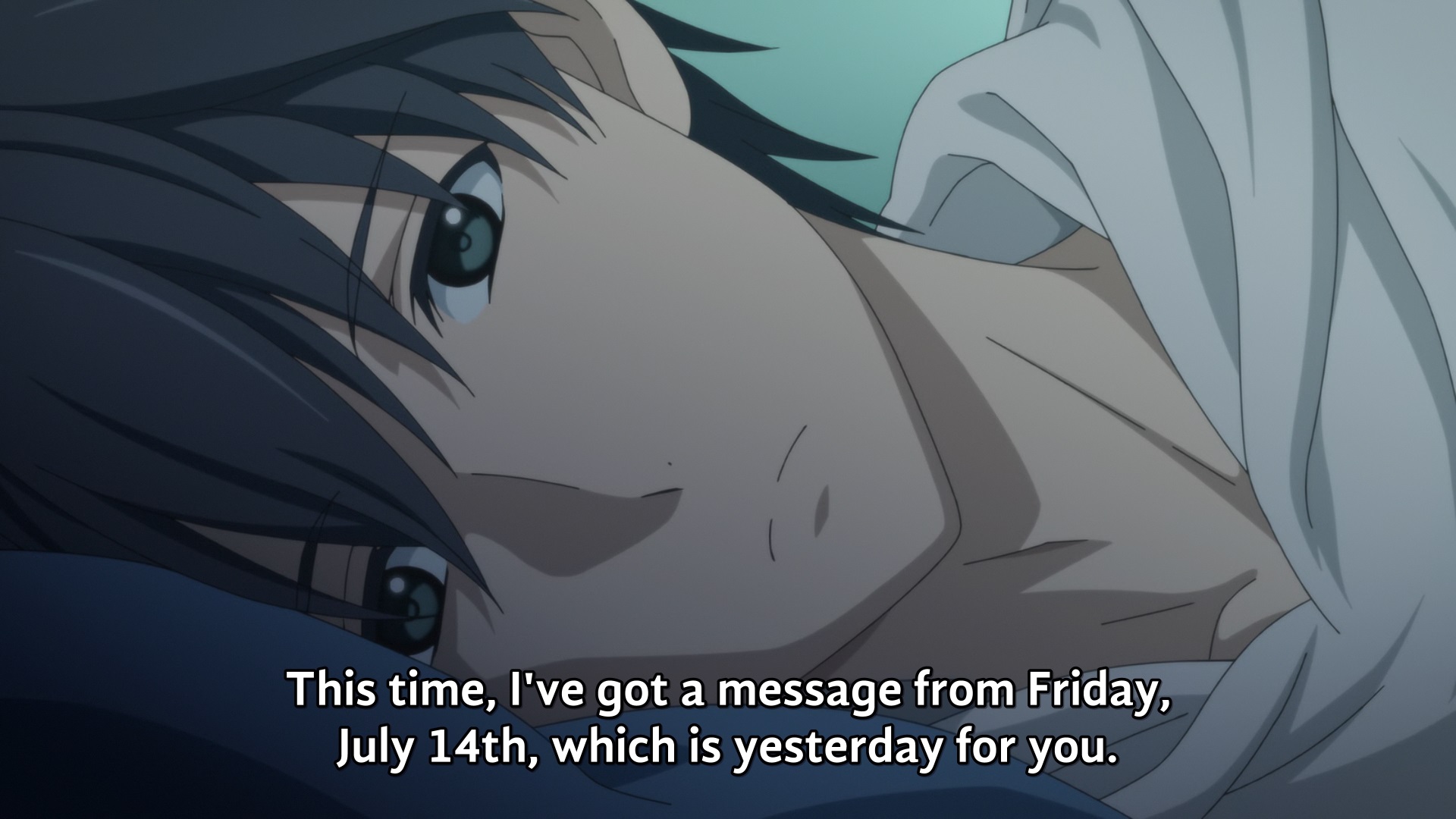 Nakano Tomoki’s ability, which allows him to project voices directly into others’ minds, is perhaps the closest thing in the series to a pure distillation of Souma’s ideal. In the second episode, Kei describes it as “the most selfish and beautiful ability I know of,” and he’s probably right—it’s a simple power, the sole purpose of which is to convey words from one person to another, bypassing all manner of barriers. Time, physical location, and even the recipient’s desire to hear it are made irrelevant.

But it’s a one-way, no-opt-out message delivery system, giving the recipient no way to respond and the sender no way to know if they’ve chosen the right words. If it came across in the way they intended. If it made the person on the other end happy or sad or angry or upset.

So while close, it’s far from perfect—Souma clearly cares not only about the simple transmission of information, but the entire, very human process of actually communicating it. 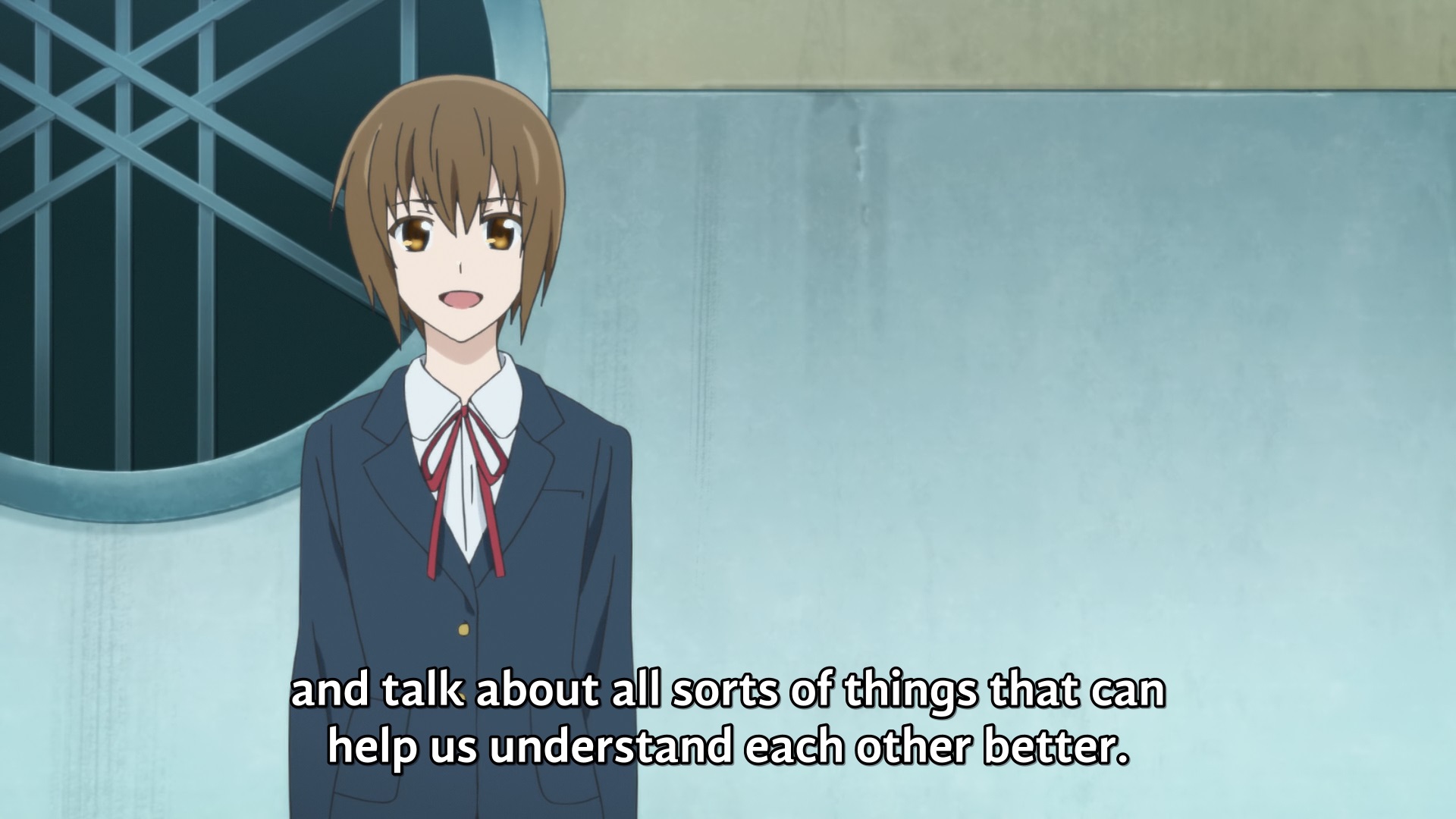 Meanwhile, on the far other end of the spectrum, we have Hitsuuchi (非通知くん, a nickname derived from the word for hiding your phone number from the person you’re calling), aka Yoshii Ryouji. He can only be reached through an arcane ritual involving dialing the same out-of-service number dozens of times, and he masks his voice to keep his identity a secret. Hitsuuchi consumes information, his ability quite literally allowing him to draw sustenance from words. He does offer information as well, but by and large, he trades in data, rather than the more personal kind of messages Tomoki does.

And like Tomoki’s, Hitsuuchi’s ability has its limitations. If he absorbs too much information from someone at once, he runs the risk of sucking them dry, killing them—which, indeed, he mistakenly does after Murase Youka severs his phone line, cutting off his safer source of nourishment.

Murase is likely the character in these two episodes who has the most issues with open, honest communication. Her brother joined the Bureau two years ago, carrying with him the strong belief that the organization could better make use of Sakurada’s powers to prevent tragedies and make the world a better place. But after only a year on the job, he died in an accident, and—because there was nothing supernatural about it—the Bureau refused to act.

Consequently, Murase lost all faith in the organization, vowing to tear it down and rebuild it properly—as her brother had envisioned it. She stopped attending school, and now she operates mostly on her own, manipulating others to do her bidding with lies and threats. 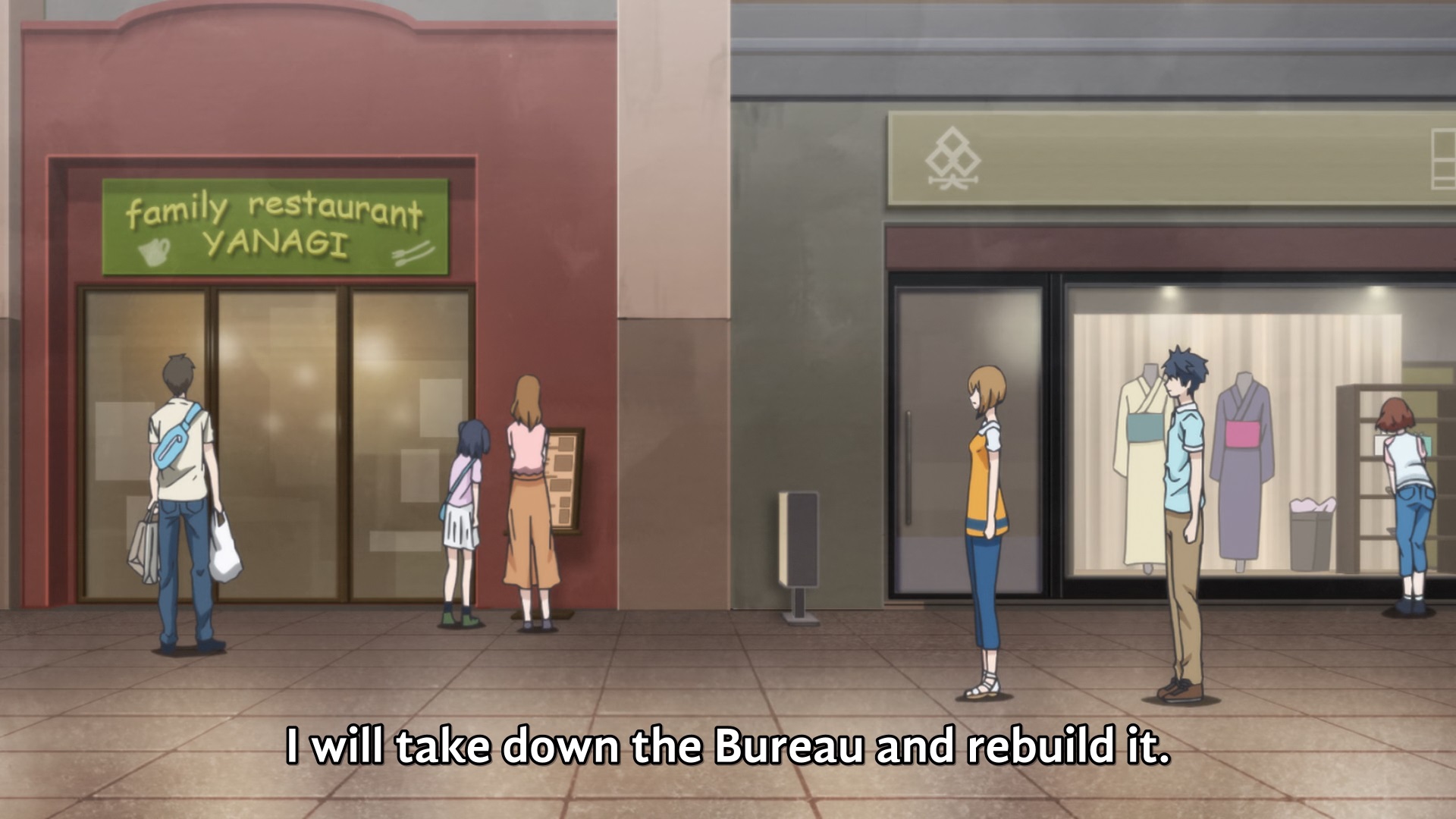 It’s her request to save a stray cat that was hit by a car that sets the events of the next two episodes in motion. But unable to trust Kei, who is ostensibly working at the Bureau’s behest, Murase instead stalks him, eavesdropping on his conversation with Nonoo Seika—who can share consciousness with cats—to get the information she needs to protect the stray herself. Murase’s ability allows her to “erase” anything that comes in contact with her, including the effects of other abilities, which she uses to keep her memories after Haruki resets. She then finds the cat, takes it in, and cares for it until after the accident is supposed to happen.

But Murase’s work isn’t done there.

As part of her plan to dismantle the Bureau, she’s after an object known as the MacGuffin, said to grant whoever possesses it control over all the abilities in Sakurada. She makes contact with Hitsuuchi, but he refuses to give her the information she seeks, so Murase severs his phone line in retaliation, which forces him to go outside to obtain nourishment. This leads to him encountering a girl named Minami Mirai, who appears to be immune to the side-effects of his ability. Thinking it safe, he continues drawing information from Minami, accidentally killing her.

When Murase learns what her actions have caused, rather than simply confess and ask for help, she attacks Kei, threatening to kill him and Haruki until he finally relents and resets, undoing Minami’s death.

For the past year, Tsushima Shintarou—an agent of the Bureau and Kei’s and Haruki’s advisor in their school’s Service Club—has been trying to set Murase straight, but her pervasive lack of trust and unwillingness to be honest about her intentions keeps causing problems. So after yet another incident where Murase attacks someone, Tsushima seeks Kei’s assistance. He agrees to help—albeit reluctantly, as he’s not sure he can get through to her without resorting to drastic, potentially traumatizing measures.

The next day, Kei confronts Murase, saying he’ll join forces with her in her attempt to rebuild the Bureau if she can pass his test. But if she can’t beat him, she doesn’t stand a chance against the entire organization, so she’ll do things his way—start attending school again, graduate, join the Bureau, and enact the change she wants to see from the inside.

The things she refused to say herself.

Then, when it looks like she has him cornered, Kei offers Murase one last chance to surrender. And when she refuses, he takes advantage of her ability, forcing her to kill him. She breaks down, crying over his bloodied body, and a little over a minute later, a pre-scheduled order to reset from Kei comes in, courtesy of Tomoki. Murase, who retains her memory, concedes defeat. The two of them sit down and, for the first time, they talk openly. No lies, no trickery, no scheming. Just an honest, heart-to-heart conversation about the things they’d like to do and accomplish together: help people, help animals, spread joy however they can. 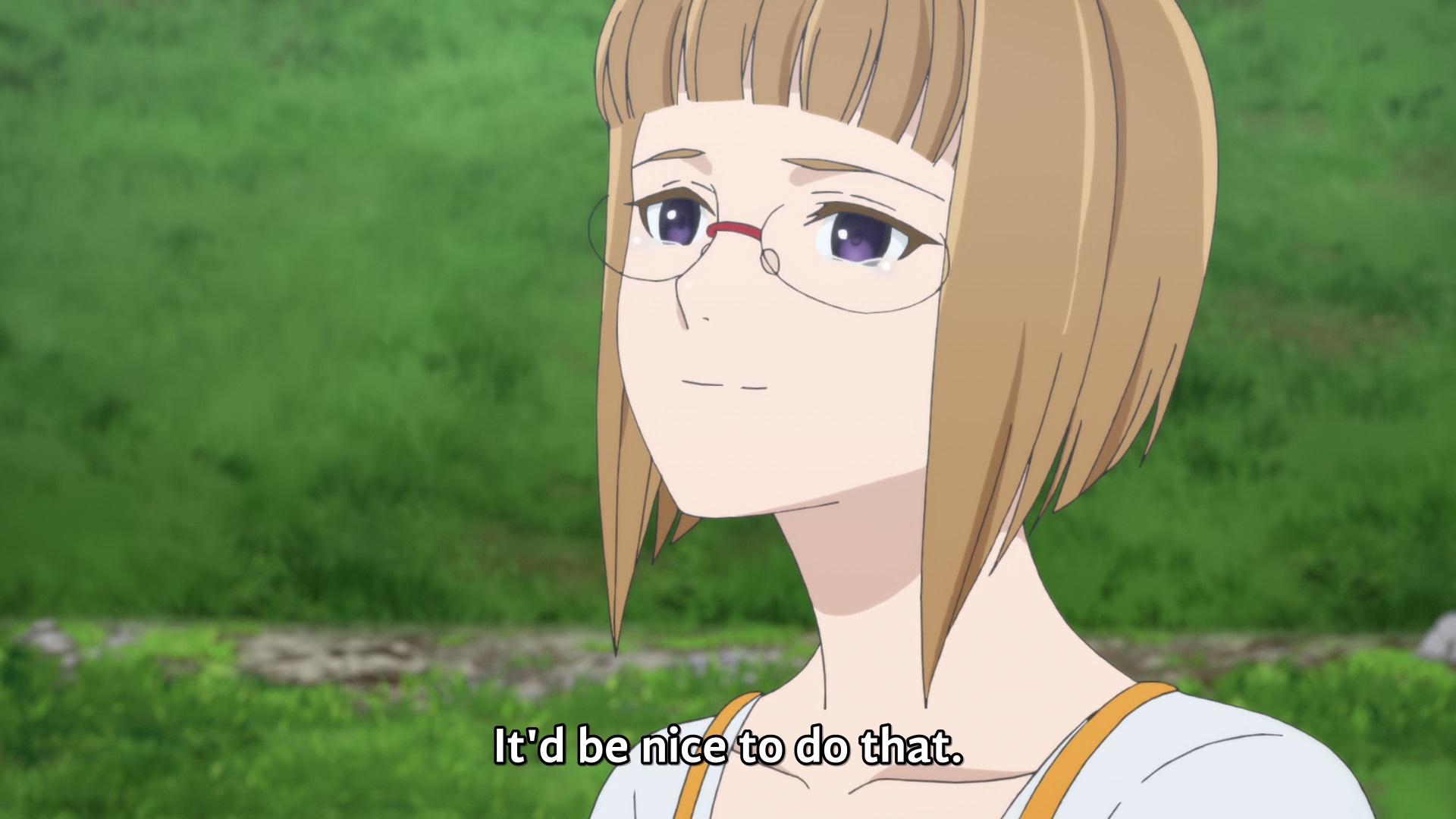 Sometimes, no matter how hard we search, we can’t find the right words to say. We approximate, we leave things out, we hope for the best. Sometimes, like Murase Youka, we simply aren’t willing, able, or comfortable with opening up at all—the trust it requires is fragile, oftentimes difficult or impossible to reforge when betrayed.

Communication is a bumpy road. Our language is imperfect, our words imprecise and colored by individual experiences. But at the end of the day, all we can do is have faith that we’re not just shouting into the void. That someone’s on the other end, listening for our messages.